By Sharon Dowdy for CAES News

University of Georgia food scientist Xiangyu Deng has been awarded the Larry Beuchat Young Researcher Award by the International Association for Food Protection (IAFP). The award recognizes excellence in food safety and was presented to Deng at the IAFP meeting held July 8-11 in Salt Lake City.

The IAFP presents the Beuchat award to a young researcher who is an active member and has shown outstanding ability and professional promise as a researcher in food microbiology and/or food safety in the early years of his or her career. Sponsored by bioMerieux Inc., the award includes a plaque and a $2,000 honorarium.

The IAFP named the award in honor of UGA Distinguished Research Professor Larry Beuchat, a retired College of Agricultural and Environmental Sciences food microbiologist at the Center for Food Safety (CFS) on the UGA campus in Griffin, Georgia. Deng is also a researcher at the center, where Beuchat still actively participates in research projects.

Last year, Deng’s work in the emerging field of bioinformatics led to his selection as a UGA Creative Research Award winner. The medal is one of the prestigious honors bestowed annually by the UGA Research Foundation to outstanding faculty, postdoctoral fellows and graduate students in recognition of excellence in research, scholarly creativity and technology commercialization at UGA.

Deng was recognized for creating a cloud-based software tool that quickly classifies strains of salmonella, one of the most prevalent foodborne pathogens in the United States and worldwide. The SeqSero system identifies serotypes, or distinct strains of salmonella, from infected humans, animals, foods and the environment using whole genome sequencing. This system allows for accurate, fast fingerprinting of any salmonella strain in minutes rather than days and replaces a complicated, time-consuming laboratory protocol.

“Dr. Deng’s unique set of multidisciplinary skills combined with his enthusiasm for developing better methods for characterizing foodborne pathogens is a dynamic combination that has already produced impressive results,” said Francisco Diez, director of the CFS.

IAFP also presented UGA Regents’ Professor Michael Doyle, now retired, its Honorary Life Membership Award. This award recognizes IAFP members for their dedication to the high ideals and objectives of IAFP and for their service to the association.

Plant pathologist Bochra Bahri joins UGA turfgrass research team Posted on 12/19/19 by Sharon Dowdy
Bochra Bahri has joined the University of Georgia as an assistant professor of plant pathology. Based on the UGA Griffin campus, Bahri will conduct research on turfgrass and forage diseases that affect growers in Georgia, the nation and around the world.

Triple Dawg Bethany Harris lands job at Callaway Gardens Posted on 12/09/19 by Sharon Dowdy
Bethany Harris has found the perfect job using her entomology and horticulture education from the University of Georgia College of Agricultural and Environmental Sciences. As assistant director of education at Callaway Gardens, Harris truly works out in the field, overseeing the butterfly center and educational gardens, managing over 200 volunteers, and teaching workshops for the public. 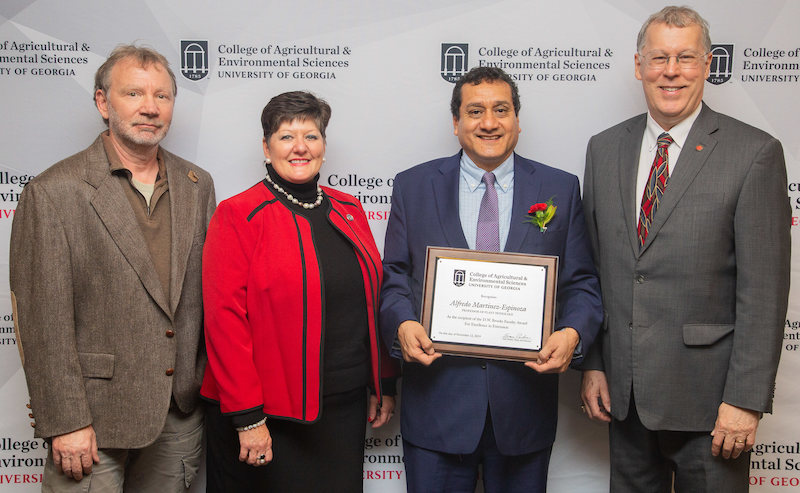 Alfredo Martinez-Espinoza awarded D.W Brooks Award for Excellence in Extension Posted on 12/06/19 by Sharon Dowdy
University of Georgia Griffin campus plant pathologist Alfredo Martinez-Espinoza has been awarded the 2019 D.W Brooks Award for Excellence in Extension. The award recognizes his UGA Cooperative Extension and applied research program that focuses on the management of new and recurring diseases of turfgrass, small grains and nonlegume forages and his delivery of relevant information to stakeholders and fellow Extension professionals.